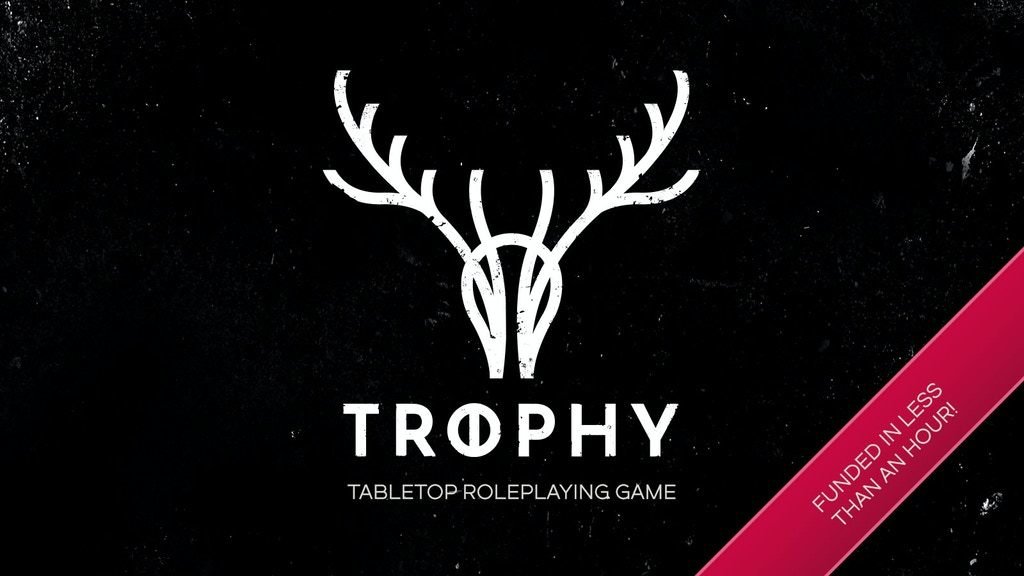 What's the difference between Trophy Dark, Trophy Gold, and Trophy Loom? Are they all one game?

Trophy Dark is a single session (or, at most, 2-session) game of psychological horror. It contains over 20 unique incursions (scenarios) so your group can get dozens (possibly hundreds) of hours of enjoyment out of one book.

Trophy Gold is a campaign-based game about adventurers in a fantasy world, not unlike Dungeons & Dragons and similar games. It also contains lots of premade scenarios so you can get dozens (possibly hundreds) of hours of enjoyment out of one book.

Trophy Loom is a setting book that contains tables and other procedural generation methods to create the world your Trophy campaign takes place in. It is system-agnostic, which means it can be used for games other than Trophy.

Does the Treasure-Hunter (Preorder Edition) add-on feature the custom slipcase featured on Kickstarter?

No. The Preorder Edition of the Treasure-Hunter collection contains all three hardcover books, but they are NOT in a slipcase. The custom slipcase is a Kickstarter exclusive.

How many custom dice do I need to play Trophy Dark and Trophy Gold?

Technically-speaking? None. You can use regular dice in three different colors to play Trophy Dark and Trophy Gold. However, the custom dice can make the experience a little more special, and so we recommend picking them up. The amount of dice you get in the Treasure-Hunter collection will be enough for most groups. Extra dark dice and extra gold dice are occasionally helpful when playing Trophy Gold, which is why we made the 4-dice add-ons available. If you only ever intend to play Trophy Dark, you don’t need any gold dice or Hunt Roll tokens.

How many Hunt Roll tokens are needed to play Trophy Dark and Trophy Gold?

You don’t need Hunt Roll tokens to play Trophy Dark. For Trophy Gold, the amount included in the Treasure-Hunter collection is enough for most groups. If your play group is on the larger side (say, 5 or 6 players), extra Hunt Roll tokens are helpful.

Are the Character Cards necessary to play Trophy Dark and Trophy Gold?

No. You can play both Trophy Dark and Trophy Gold perfectly fine without them (we’ve been doing so for years!). However, the cards are being designed to enrich the gameplay in a big way. They feature unique artwork plus questions that can be used to explore your character. They also give the GM the flexibility to build custom character options, and in Trophy Dark, they eliminate the need for a character sheet entirely.

How come I can't upgrade my pledge to the Archivist level from Kickstarter?

The Archivist pledge tier is exclusive to Kickstarter. We were initially going to do a Preorder Edition of Archivist, much as we did for Treasure-Hunter, but the customer savings between that and simply pre-ordering the books separately was negligible, and so we decided to cut it. Ultimately, the very best value is the Treasure-Hunter collection, which we strongly recommend if you think you’re ever going to want all three books, dice, etc.

BackerKit is a service that crowdfunded project creators use to keep track of hundreds to tens of thousands of backers—from shipping details, pledge levels, preferences and quantities, whether they have paid or had their card declined, special notes, and everything in between!

The BackerKit software and support team is independent from the campaign’s project team—BackerKit does not handle the actual reward shipping. For more information about the preparation or delivery status of your rewards, please check the project's updates page.

How does BackerKit work?

After the campaign ends, the project creator will send you an email with a unique link to your survey. You can check out a walkthrough of the process here.

I never received my invitation. How do I complete the survey?

The most common reasons for not receiving a survey email is that you may be checking an email inbox different from the email address you used to sign up with Kickstarter, Indiegogo or Tilt Pro account, or it may be caught in your spam filter.

Confirm that the email address you are searching matches the email address tied to your Kickstarter, Indiegogo, or Tilt Pro account. If that doesn’t work, then try checking your spam, junk or promotions folders. You can also search for "backerkit” in your inbox.

To resend the survey to yourself, visit the project page and input the email address associated with your Kickstarter, Indiegogo or Tilt Pro account.

How do I update my shipping address?

When will my order be shipped, charged or locked?

That is handled directly by the project creator. BackerKit functions independently of the project itself, so we do not have control of their physical shipping timeline. If you want to check on the project’s status, we recommend reading over the project's updates page.

I completed the survey, but haven't received my rewards yet. When will they arrive?

As BackerKit does not actually handle any rewards or shipping, the best way to stay updated on the shipping timeline would be to check out the project's updates page.